Following is information and insight from IHS Markit about our Q4 Optical Network Hardware Quarterly Market Tracker, which includes data for the quarter ended September 30, 2016.

Worldwide, the optical equipment market totaled $3.2 billion in Q3 2016, gaining 7 percent year-over-year, but declining 9 percent quarter-over-quarter. The market was buoyed by continuing spend in China—although at lower levels—and solid year-over-year performance across all regions. The sequential drop was a result of the typical seasonal slowdown in Europe, the Middle East and Africa (EMEA) and the Caribbean and Latin America (CALA)—and also a dip in Asian Pacific investment from an extremely high Q2 2016. 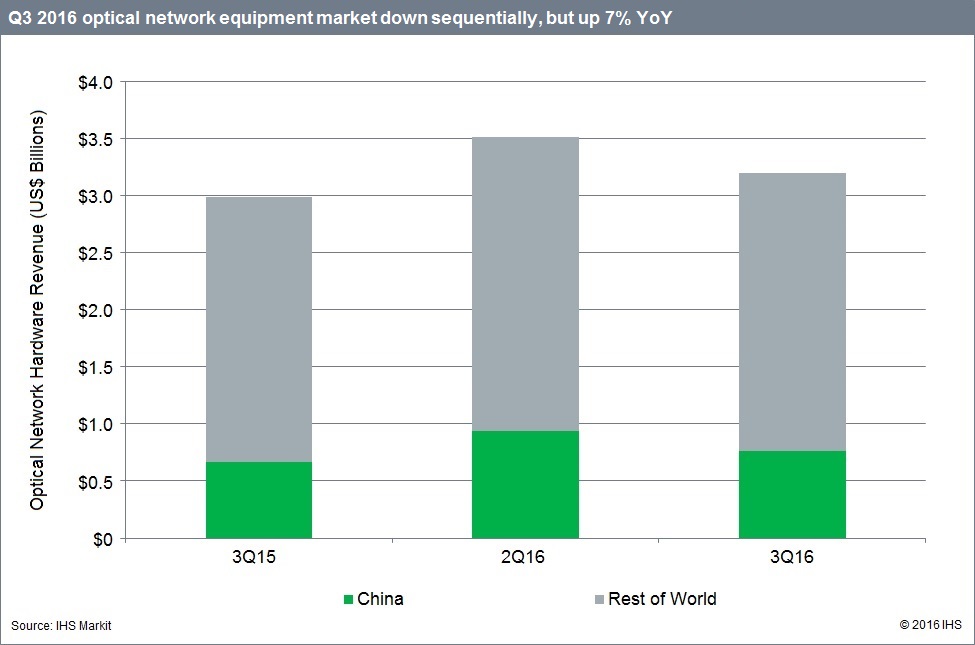 The great China optical gear spending spree seen in the first half of the year began to slow down in Q3 2016, with optical spending in the country down more than 19 percent sequentially. Although the high growth rates experienced in Q1 and Q2 2016 could not be sustained over the long run, spending increased over 14 percent year-over-year, as 100G infrastructure investment led by China Mobile continued.

North America was the only region to see both quarter-over-quarter and year-over-year growth. 100G long haul continues to perform well despite a drop in investment from Infinera customers. And the DCI market driven by the internet content providers (ICPs) is also driving growth.

The WDM equipment segment, at $2.9 billion in Q3 2016, was down 6 percent sequentially but up a solid 10 percent year-over-year. WDM is and will continue to be the growth engine for optical networks, and we forecast a 2015‒2020 compound annual growth rate (CAGR) of 7 percent for this segment. Meanwhile, the Synchronous Optical Networking (SONET) and Synchronous Digital Hierarchy (SDH) segment reverted back to its secular decline, with revenue down 18 percent from the year-ago quarter.

Looking at Q3 market share, Huawei continued to lead by a wide margin, supported by strong spending on 100G projects in China, as well as strength in EMEA and CALA. Ciena maintained its commanding lead in the North American market and maintained second place overall. Nokia edged out ZTE to regain third place overall based on solid performance in the submarine line terminating equipment (SLTE) segment, where it regained the number-one market share position.